When your feline companion is swishing their tail and turning their bubble-shaped eyes towards you, you do tend to just go gaga over them and pet them. Now, if you are a skilled cat owner, you might be familiar with erogenous zones for caressing a cat, most of which are on their face. Armed with that knowledge, you would use your fingers to caress their cheeks, chin, and the top of their forehead. The reaction you get is their eyes closing in bliss and their tails moving as a sign of approval.

Why Do Cats Rub their Face on You?

However, sometimes your cats can be a little too proactive, and by that, we are referring to their particular behavior where cats rub their face on you.

Hence, we have compiled a guide to delve further into the four reasons why cats rub their face on you.

1) A Mark of Friendship

If you have just become a new cat owner and are baffled by your cat’s behavior of rubbing its face on you, then don’t be worried about it. Cats tend to be quite affectionate creatures and love getting caresses. One of the ways that a cat will show its friendliness or level of comfort with the new owner is by rubbing its face on you. This lets you know that your new pet has marked you as their friend and that you have gained its trust. However, this usually happens when you have tried reaching out to your new pet first, and they have responded back.

According to Dr. Jill E. Jackman, this can be considered as a form of greeting as well.

2) Your Cat is Looking for Some Good Petting.

Sometimes your cat will approach you if you have come back after a long day of work or have not petted them in hours. That is when your cat is likely to approach you on its own so that you can pet them.  This is why you would have noticed that cats tend to rub their face on your legs or hands because those are the limbs that you use to give them good petting.

The face is, as we have known, full of pleasure spots, and as such, the friendly pheromones are released from glands present in their cheeks and chin. This process is known as ‘bunting .’ It is your cat’s way of rubbing its scent on you or gaining your attention.

3) A Cat is trying to Get More Information on You.

Sometimes cats are not looking for friendship or a good petting session. Instead, they could be playing detective and snooping around to get information on you. Now there is nothing to be scared about because cats will generally rub their face on you to feel how you are. We understand it sounds strange how rubbing their face on your leg can give them information, but that is Nature for you all.

We can tell you that it usually happens with stray or feral cats or new cats that you have just adopted. The reason is that when they rub their face on you, they are trying to smell the scent of other animals on you. That is why you may have noticed that stray cats tend to rub their faces on the legs of cat owners even though they are meeting them for the first time. After all, it gives them a sense of security that they will be appropriately handled because humans have taken care of animals.

This is a sporadic occurrence in cats which does not usually apply to every cat owner’s case. Sometimes, cats tend to rub their face on many objects, including on you, as part of their bunting. The bunting process is not just meant to get a good petting, but it is also a way of making cats feel safer and secure by rubbing their scent on different surfaces, one of which is yours. Hence, rubbing their face on you can make you appear familiar from their perspective, even if you can’t smell their scent.

So, the next time your cat appears anxious and is rubbing their face on you, just let them do it or, more so, caress them so that their anxiety levels can go down.

Now that you know why a cat may rub against you, let’s look at how this behavior began.

The History of Cat Face Rubbing

The book titled ‘Neurobiology of Chemical Communication‘ by Mousumi Poddar-Sarkar and Ratan Lal Brahmachary discussed how rubbing the face began in the wild as a form of communication driven by the release of pheromones. The action of ‘bunting’ was meant to attract a mate. In other words, cats communicate using their pheromones released chemically. It often came in handy when cats needed to remind other cats about their territory’s boundary since many territories overlapped.

The pheromones in cats act like behavior-changing agents, and they are concentrated in a cat’s face. So when a cat is rubbing their face against you, they are trying to establish a social communication channel with you. So it can be about getting a petting session, friendship, bonding time, signal that they need food, or tell you that they want to be left alone.

Cats cannot speak, so they won’t just meow their way to get their demand. After all, cats are pretty demanding creatures. Nonetheless, your indoor cat will most likely just want a petting session since that is the most probable cause for them to rub their face on you.

But that doesn’t mean you don’t pay close attention to the other 4 reasons highlighted in this guide. They rarely happen, but they do exist as behaviors in some cat species. Never ignore your cat; give them time and affection because that is what your feline friend deserves from you. 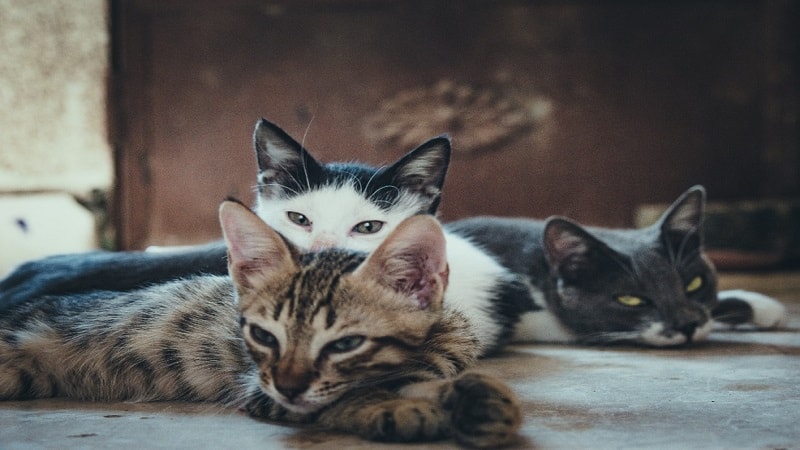